How Much Water Do We Use Each Day

How much water do we use each day - Water is an essential part of life, as we all know. Not only for individual use, but also in businesses of all types. That’s why water consumption has been - and remains - a hot topic, with many campaigns, focused on telling us to reduce water wastage.

However, as the British population grows, then water usage in all settings, domestic, commercial, industrial, and agricultural is increasing. Add into the mix reduced rainfall thanks to climate change, and it’s not surprising that there are real concerns about whether future demands for water can be met.

An increasing population, increasing water usage, and reduced rainfall are creating a perfect storm. This increased demand and lower availability of rainfall have led to more and more water being abstracted from waterways across the country. In 2016, almost 9,500 billion litres were extracted, leading to around 11%, or 1,075 waterways, being considered at risk by the Environment Agency. Such low levels of water leave waterways at risk of pollution and have a severe adverse effect on their ability to support the local ecology system.

Water use in the home is increasing year on year. Currently, the average person living alone uses 54m³ per year, which equates to around 149 litres per day. The standard four-person family household utilises 164m³ per annum, which works at an average of 450 litres per day. This increase is mainly due to increased hygiene, with people washing more, and using washing machines and dishwashers more. Baths use around 115 litres, and even an average shower needs 50 litres. Washing machines use approximately 55 litres per wash, and dishwashers roughly 15 litres. People are also taking more pride in their gardens and are watering their plants more, often using hoses which are particularly wasteful as they can easily use 1000 litres per hour.

South Staffs water produced a report about water usage in commercial settings, such as offices. Their research showed that each employee would use, on average, 50 litres per working day. This is in addition to any water used at home. Of this 50 litres, almost 90% was used for toilet and urinal flushing, and washing; 9% for food preparation; and 1% for cleaning. Apart from food preparation, much of the water used in commercial settings don’t need to be of drinking quality.

Industrial Usage - How Much Water Do You Use Each Day?

In 2014, research carried out by the European Union’s EuroStat demonstrated that industry accounts for around 40% of total water usage across Europe. The main user is the energy industry, which is responsible for over half of that usage. In some countries, power generation accounts for over 90%. In both power production and manufacturing, water is mainly used for cooling purposes, which doesn’t require the water to be of drinking quality, but which is usually drawn from the mains water supply.

Agricultural Usage - How Much Water Do You Use Each Day?

In 2011, DEFRA carried out research that showed that British agriculture uses around 180 million cubic meters (180,000,000 litres) of water per annum. Of this, 42% is used for watering crops, and 40% for maintaining livestock. In 2015/16 a Farm Business Survey carried out in England showed that despite the fact that much of this water doesn’t need to be of drinking quality, the majority of this water, around 69%, comes from mains supplies. The remaining 31% was made up of 19% from boreholes, and 12% from waterways. Despite the fact that crops do not need potable water, cereal farmers tend to use more mains water than other farm types. Dairy farms and grazing livestock farms are more likely to use water from boreholes or water extracted from waterways.

The Solution - How Much Water Do You Use Each Day?

As can be seen from above, in all of these settings drinking quality water is used for purposes that don’t require potable water to be used. In homes and commercial settings, it’s hard to switch to non-potable water but things such as installing dual-flush toilets, using energy-efficient electricals and light bulbs, taking showers, switching off taps, and storing rainwater for watering plants, can make a significant difference. For industry and farming, the opportunity to save water is much higher. Installing rainwater harvesting systems on both existing and new buildings not only helps reduce the consumption of mains, drinking quality water, but helps protect the environment as extraction from waterways and boreholes is decreased. EnduraTank recommends that businesses and farmers aim to store around three months’ worth of rainfall, especially when heading towards the warmer months.

Enduratank is aware of the environmental impact of the increasing use of mains water. That’s one reason that we manufacture rainwater harvesting tanks in 42 sizes, ranging from 150 litres to 90,000 litres, with both above- and below-ground options available, making them ideal for any application.

In addition to the rainwater tanks, Enduratank fabricates 51 WRAS approved potable tanks, all constructed from a single piece of high-density food-grade polyethene. This one-piece, the seam-free design minimises the risk of leakage and reduces the need for maintenance. Our tanks can also be supplied with framed support bases. As with all of our tanks, our potable tanks are entirely DWI approved and meet all Regulation 31’s specific regulations. 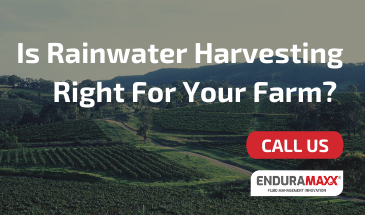 Drinking Water Regulations: What You Need To Know

If you have a private water supply, then it is essential that you are up to date with the drinking...

Any dairy farmer knows that water is key to milk production. Milk is around 87% water, so it’s not...

How Much Water Do You Use Each Day?

How much water do you use each day – Water is an essential part of life, as we all know. Not only...